This role “in between”, as a connector or bridge, is crucial to understanding my arts practice, which may appear at first glance to dance across many genres and mediums.  My sculptures often are fluidly choreographed into performance artworks or installations, many of which have been commissioned here in Aotearoa (New Zealand) and around the world. I employ a variety of media and materials from recycled materials, industrial concrete, Carrera marble, corned beef tin and other metals in the pursuit of creating artworks that enrich their surroundings and instigate deeper awareness across our environment, cultural and historical divides. Check out the survey of selected artworks from my portfolio I’ve created over the years. 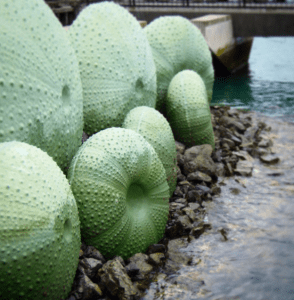 One February morning in 2014, I led a coalition of artists, art workers, scientists, rangers and tow truck drivers and entered the bushland near Airds known as the Woolwash to retrieve six wrecked cars. For the following seven weeks, my team and I worked tirelessly in an outdoor sculpture studio in the Airds shopping centre car park, building the sculpture Buru Transforma Kangaroo (2014). A dynamic learning and community engagement program ran alongside, targeted at local youth. The residency culminated in the Transforma Party on 12 April 2014, and two days later, the sculpture made its short journey from the car park studio to Airds High School, where it now stands.

Transforma was commissioned by the MCA and Campbelltown Art Centre as part of there C3West Community Engagement program. The curatorial team and I developed a strong and meaningful community engagement program targeted at local youth, and the Transforma project was earthed,  spanning two years and involving a tremendous amount of research, developed workshops which reached right into the heart and psyche of the Airds Bradbury community of South West Sydney. And then, one February morning in 2014, I led a coalition of community elders, curators, city council members, politician, scientists, state rangers and local tradies, and entered the bushland near Airds known as the Woolwash. Our collective mission was to retrieve six dumped cars. For the following seven weeks, we worked tirelessly in an outdoor sculpture studio setup in the Airds shopping centre car park, and got busy building the sculpture, Buru Transforma Kangaroo. The residency culminated in the Transforma Party on 12 April 2014, and two days later, the sculpture made its short journey to Airds High School, where it now stands with a BBQ in tact. It was an extraordinary project and one that I treasure, meeting so many incredible people throughout, with deep friendships forged

The motif of a bull or povi is a recurrent one, seen in many of my works. This life-size three-dimensional creature was sculpted from flattened out and riveted corned beef cans, an articulation of my political and environment concerns. These cattle are staunch and physically solid, crafted with care to conjure up a sense of scale and dominance.

Whirling teams of dancers faced off and did battle against a deafening backdrop of drumming, while two bulls were set upon each and then set alight, flames pouring from their gaping eye and mouth holes. The high theatrics had a strong dose of adrenalin and anger and it signalled a shift for my art practice from the strictly static to the multi-dimensional.

Many of my performance pieces draw on ritualistic acts of both celebration and warfare. Both the scale and impact of these works are grandiose, seeking to activate urban space with a sense of the sacred and spiritual. There is nothing ironic or distanced about these works, each piece is fully inhabited and stems from a deeply held position.